What you did to your Tenere today??!!

Not actually today but this week added 2" extended brake line and a new 2" extended clutch line so that I could put my HeliBar Risers on. Took the bike into the shop and had 6000 mile service done. I had the TB's Sync because I thought at times it wasn't running right. Big improvement.
My biggest change is my Laam Seat that was suppose to have been here yesterday, delayed till Monday delivery. I got pictures anyway. Really looking forward to try this seat out.

I had a laam on my fjr. It was a nice seat. I tried several times contacting him about doing one for the tenere and never got any response. That was 5 months ago. I got Terry adcox to build mine and he answers messages within an hour or so. Very responsive and a nice seat also. Just got it a few days ago.

Pulled front and rear wheels to have new tires installed.

Love that new tire handling when the rear wants to actually turn in as much as the front does!

Well, for what it's worth, the reviewers claim that is one of those tires strong points. I like the looks of them. But, they're spec'd as a 80/20 tire. To me, they look more like a 95/5. Looks like they have tons of pavement grip. Please keep us, or at least me, informed as to how you like them.

I agree, I see them as a 90/10 or maybe a a 95/5 tire, the latter describing my riding pretty accurately. One reviewer on YouTube who I believe lives in Spain put 10,000 km on his set between pavement, dirt, sand, gravel and mud said they were good except in mud...which I would believe, there's no "bite" in their design. His tires, mounted on a VStrom 650, showed a ton of tread depth after 10,000 km.
C

Wow that is a heck of a deal on a set of tires. Think Ill go for it. Chapparral Motorsports has them for the same amazon price.

That's what I suspected. $69 for a back tire? Holy s**t good price. Still, not a deal breaker.

RIP airhorn I guess the oem guards did there job mostly.

Kyle_E said:
Wow that is a heck of a deal on a set of tires. Think Ill go for it. Chapparral Motorsports has them for the same amazon price.

Asked a friend on them and he said on his st they lasted 5.5k for the rear and the front was done as well. He had them back in 2014 and said they were great.

Last Saturday I posted pictures of my Seth Laam seat before it arrived, the seat finally arrived. Here it is on the bike. The passenger seat was extended out 2" on each side for more hip support. The wife isn't a heavy weight at 5' 115 lbs but has a hip that has started bothering her, so I had Seth extend the seat.

Picture of HeliBar Risers, already can tell that it definitely has made a difference. No slouching forward, has put me in an more upright position. It has helped calm down my wrist and I haven't experienced the finger/hand numbness since I added them.

Picture of fog light clamp. just want to say that these $14.00 clamps are the bomb, so far. I tried the name brand type that swivel and they sucked all the way around. These cheapies hold tight and I haven't had to re-tighten them once over the last 1500 miles. I was skeptical but for $14 what the heck. I am really surprised at how well they have worked for me.

Got some new Shinkos put on! 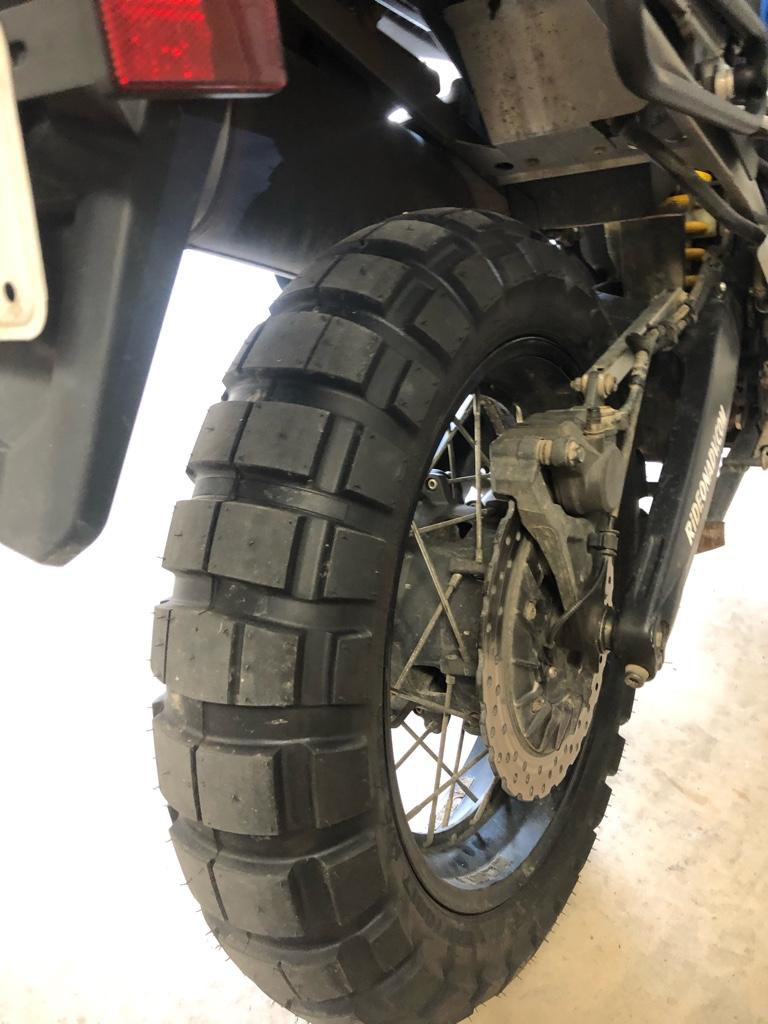 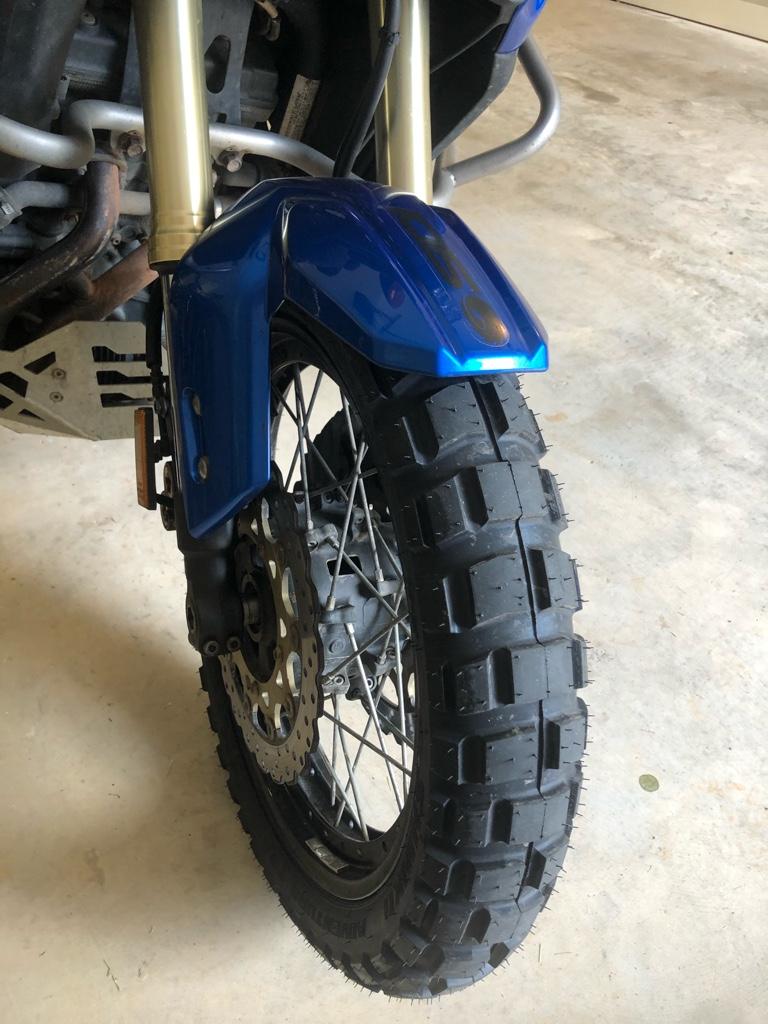 Sent from my iPhone using Tapatalk

Can you feel that tread on pavement?

They're what I would want in the dirt. They're a chunkier version of what came on my wife's TW 200.

Sierra1 said:
Can you feel that tread on pavement?
Click to expand...

Maybe some, but I like them. I wished they last a tad longer, though. And they’re relatively inexpensive.


Sent from my iPhone using Tapatalk

s.ga.rider said:
I had a laam on my fjr. It was a nice seat. I tried several times contacting him about doing one for the tenere and never got any response. That was 5 months ago. I got Terry adcox to build mine and he answers messages within an hour or so. Very responsive and a nice seat also. Just got it a few days ago.
Click to expand...

I tried a Laam seat well. Spent a lot of time discussing what I wanted with him (flat seat that doesn't force me to sit back into a pocket) and he sent me a seat that forced me to sit back into a pocket. Sent it back to get reworked, but it was pretty much the same. Sold it and got a Seat Concepts, which worked better. On my current S10 I'm running a Terry seat, best seat yet by far.

FWIW, my Helibar risers bolted on no problem with the brake line extension that they include. Nothing else needed.

Installed new to me Akro pipe and carbon shield.
Thnx to Fortech

Trying to finish up what will be the final mods I'll ever do to this bike.

I was torn between Bumots and Caribou cases, but ended up going with Happy Trails Teton 9" clif-cut (which should deliver next week), as Mak10 originally suggested to me in my first post here. Function over form. Couldn't justify spending twice the price for what amounts to an aesthetic improvement when the 2019 Tenere isn't a show bike to begin with -- I just wanted something cheap (replaceable), tough, and watertight. Probably could have gotten by with some cheaper Tusk cases for my needs, but I like the latches on the HT more, and the price is excellent for the quality so far.

Didn't have mounts to install the LED pod lights to the crash bars, so I mounted to the forks temporarily -- what I call the "don't drop the bike" mod. The 8" light bar comes on with the high beams, but I also added independent switches to the handlebars so I can turn on the light bar or the pod lights independently (diodes preventing back-feeding to the high beam circuit). Been using the pod lights during the day to make me more visible to cagers. Swore to myself I'd never do the light bar, as it makes the bike look like an angry monkey face, but decided function over form again. I do lose 1" of suspension travel with the light bar, but I live in flat-as-a-pancake Kansas -- not really doing any "sweet jumps" on 90% city roads and 10% gravel country roads -- if I decide to do any real off-roading, I can disconnect and remove the light bar in about 3 minutes.

The 3" riser on the tail plate was proud of the pillion seat -- no bueno for the girlfriend's tailbone, so I replaced the included spacers with 1/2" shorter ones from the homeless despot (home depot) to make it flush. Still need to locate some smaller cases for the two tool rack locations, and start adding some tools to the bike.

Sierra1 said:
That's what I suspected. $69 for a back tire? Holy s**t good price. Still, not a deal breaker.
Click to expand...