Back in 2018 I designed and built a pannier quick release system to work with my Happy Trails pannier racks. After three years and about 40,000 miles, some design flaws became apparent; rather than repair the existing system, I decided to design and build a new one. If you want to see the original system from back in 2018, the thread is here:

The project was entirely designed on a free graphic arts program called Inkscape. It has pretty much replaced drafting tools and graph paper for me. It’s not a CAD program that can design in 3D, but it works really well for the sort of designing I do. The project went through several designs, and several foam core board and basswood mockups, before I decided on a final version.

I’ll cover the highlights in this post of how it was made, and if you want additional details, there’s a PDF attached to the post with a lot more photos and details.

The attachment system was built using 5/32” aluminum sheet, various sizes of 6063 architectural aluminum angle, a piece of aluminum Z channel, and some 3/8” x 1” ABS plastic. I used stainless steel hardware throughout the project. It was primarily built with common hand tools: a hacksaw, coping saw, a drill, files of different shapes, sanding blocks, a handheld electric scroll saw, and a small tap and die set. I do now have a WEN benchtop drill press, which definitely improves the accuracy of the build.

This will give an idea of the type of design that can be produced using Inkscape. It’s the plan for the Pannier Attachment Plate, which attaches to the pannier and is the base for all the attachment hardware. 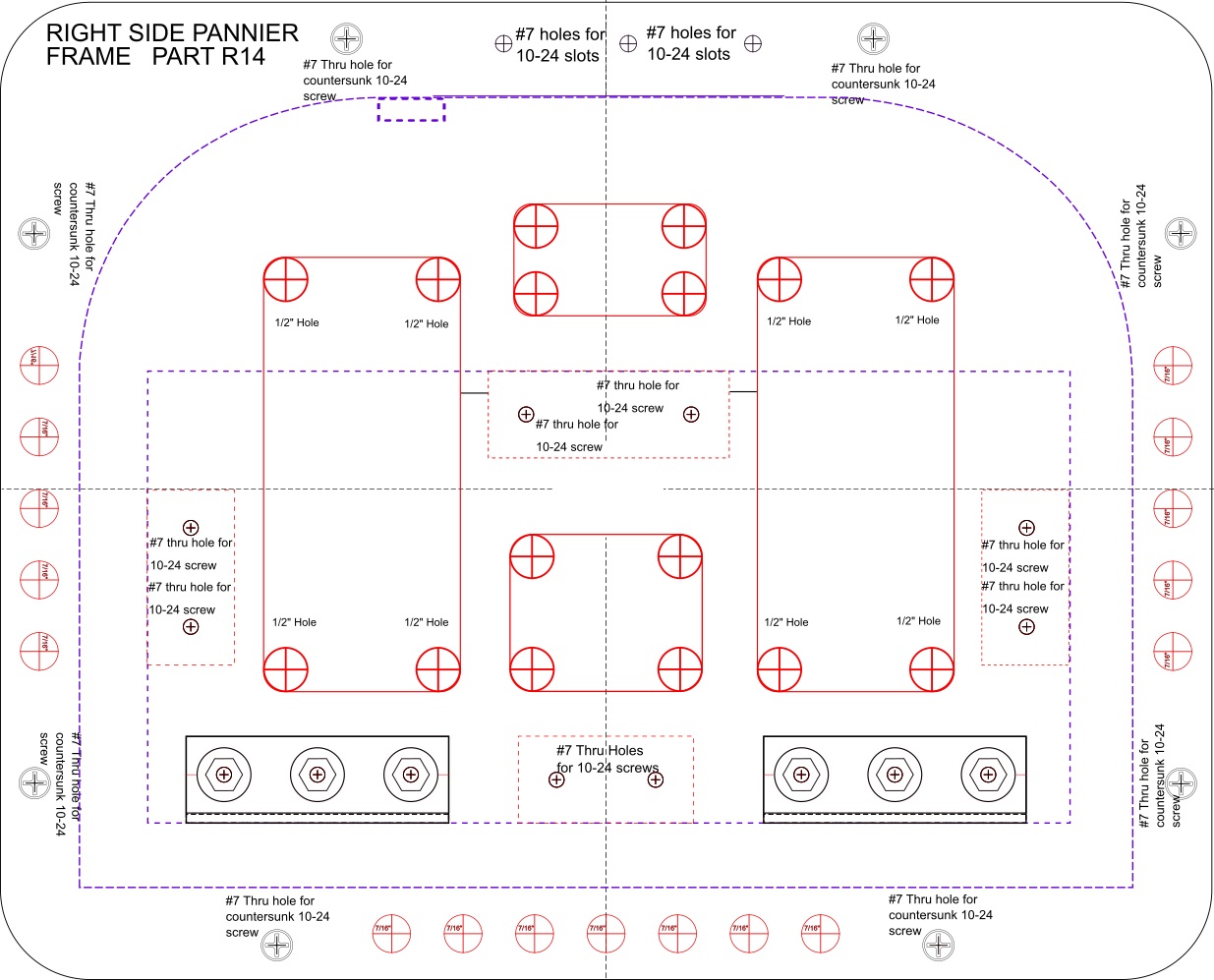 These are the major aluminum components of the system, before and after powdercoating:

These are the Rack Attachment Brackets. They’re designed to bolt onto a couple rivnuts that are installed in the Happy Trails racks at the factory. The brackets support the rotary latch that ultimately secures the pannier to the pannier rack. They were cut from a piece of 3” x 3” x 1/8” aluminum. 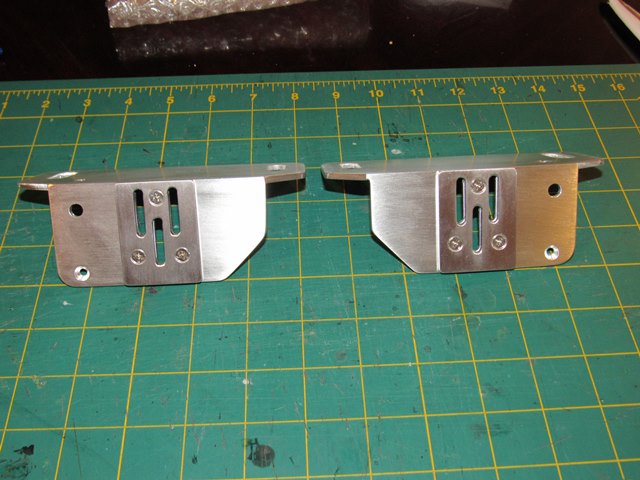 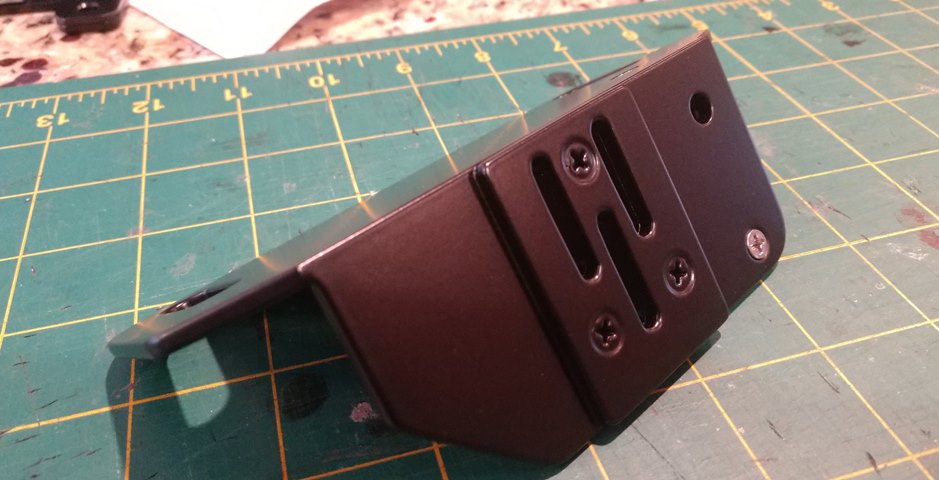 These are the Lower Clamps. They sit on the bottom horizontal tube of the Happy Trails rack, and both support the load of the pannier and keep the pannier anchored to the pannier rack. 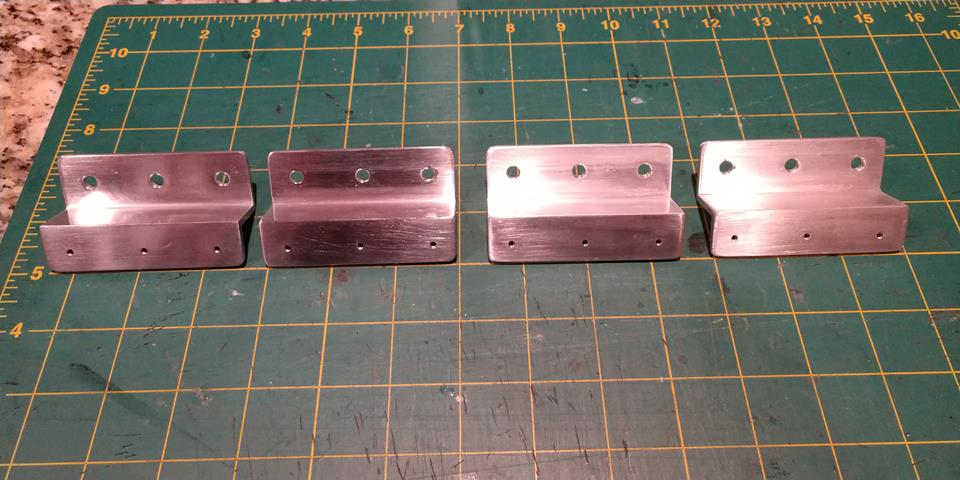 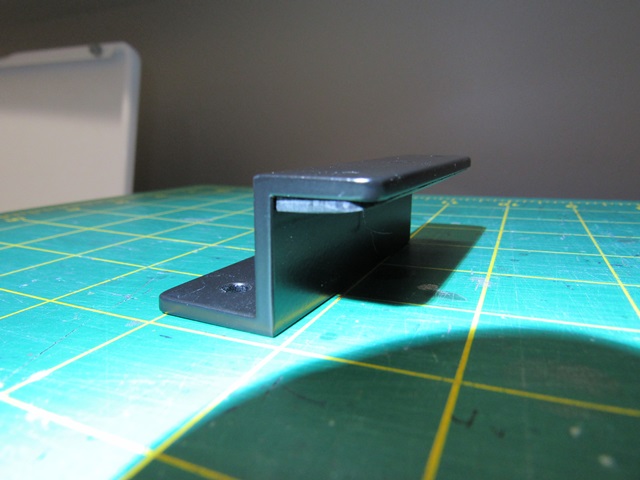 These are the Top Clamps. They are grabbed by the rotary latches, and that holds the upper part of the pannier to the pannier rack. They were made from a 2” x 2” x 1/8” piece of aluminum angle. 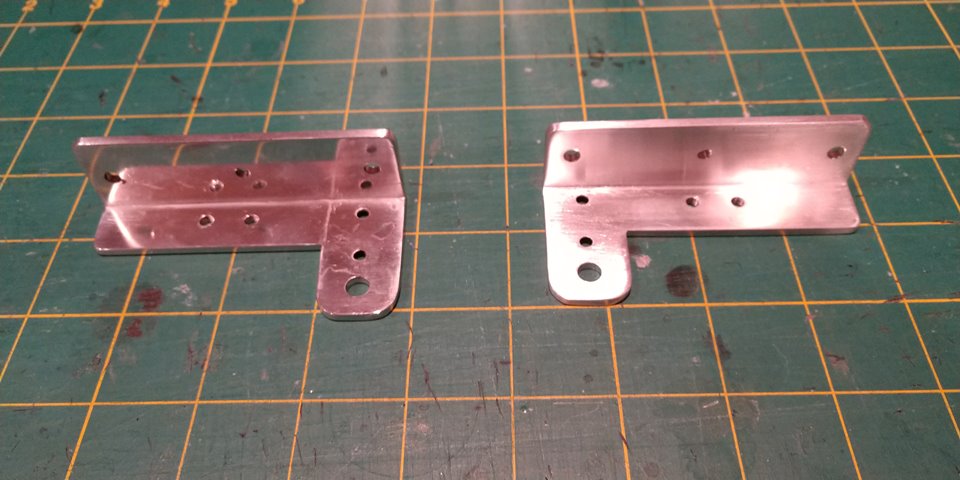 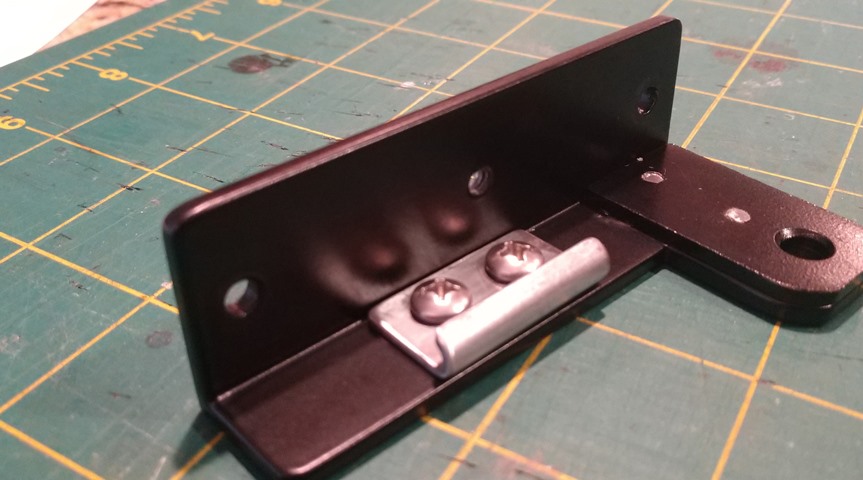 These are the Pannier Attachment Plates. All the attachment hardware is screwed to this plate, and then the plate is screwed to the pannier. These were both made from a large piece of 5/32” aluminum sheet that I bought off eBay. 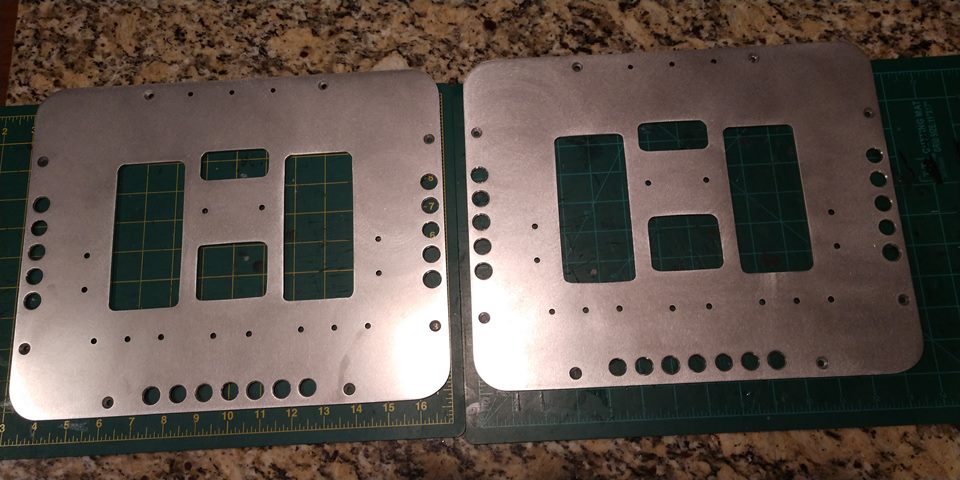 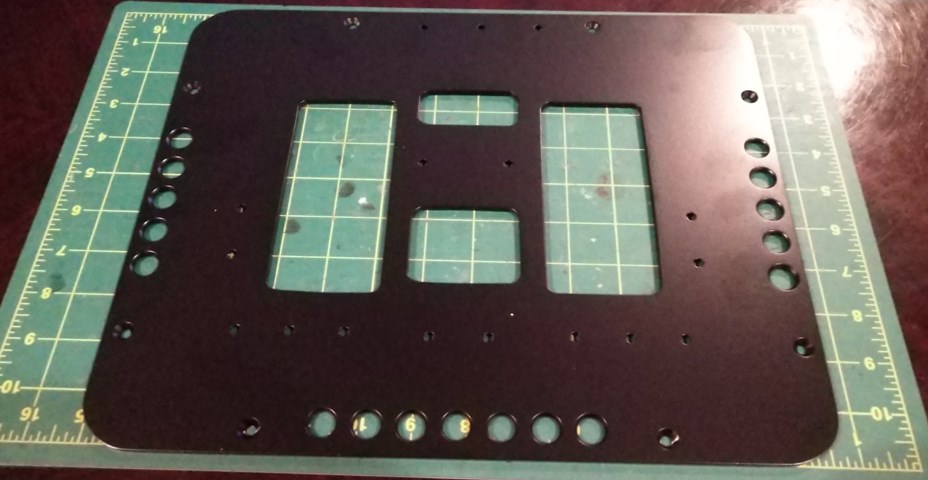 This is the Pannier Attachment Plate with all the hardware attached: All of the fasteners used throughout the project were stainless steel. 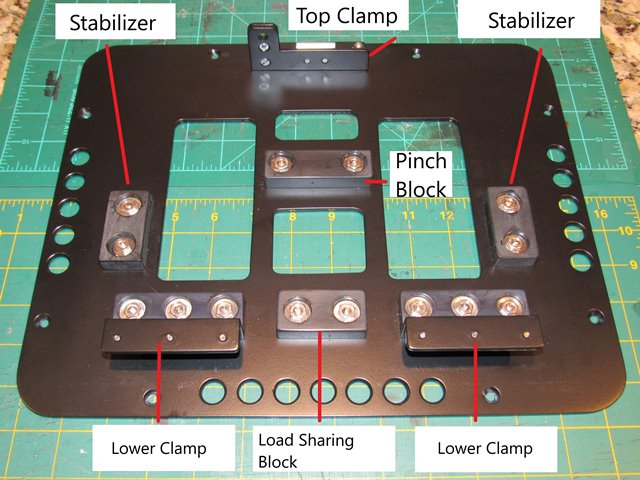 The items in the photo identified as the Stabilizers, Pinch Block, and Load Sharing Block were all made from 3/8” thick by 1” wide ABS plastic. These pieces are designed to hold the pannier securely by gripping the inside the pannier frame so it can’t be knocked loose and it won’t vibrate. I drilled recesses in all the plastic parts using a Forstner bit, so that all of the hardware used to fasten the fittings would be below surface level. It’s an aesthetic choice on my part.

The panniers I use are Chinese imported Pelican knockoffs, which were sold under the Duratool name. I bought them back in 2013, I think, and they’ve been on two different bikes now for somewhere in the vicinity of 100,000 miles. For the money, they have been excellent panniers. They’ve also been the subject of multiple versions of attachment systems, and they had a LOT of mounting holes drilled in them. This is how they looked before repair: 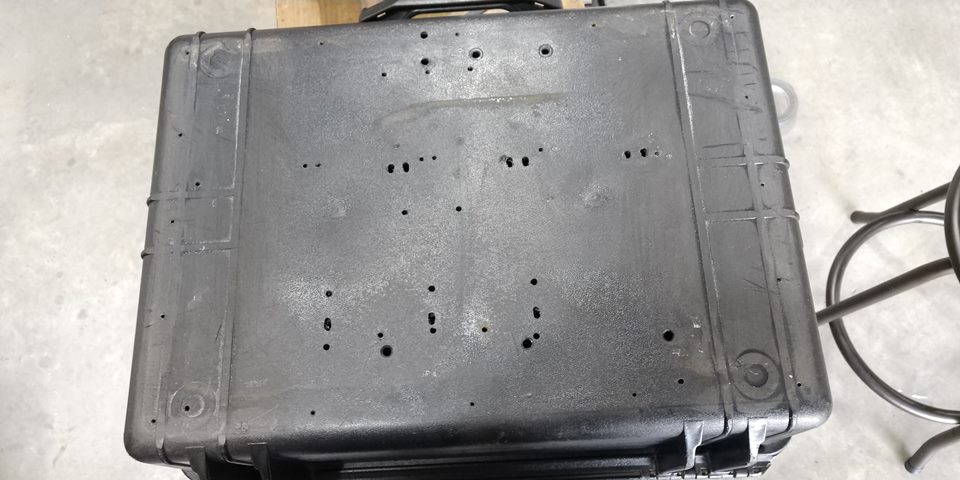 The panniers seemed to be polyethylene, so the best way to repair them was to weld them. I welded all the holes shut using a 60 watt cheapie soldering iron and an ancient Weller soldering gun. This is how the panniers looked after the holes were welded shut and the welds were sanded smooth: 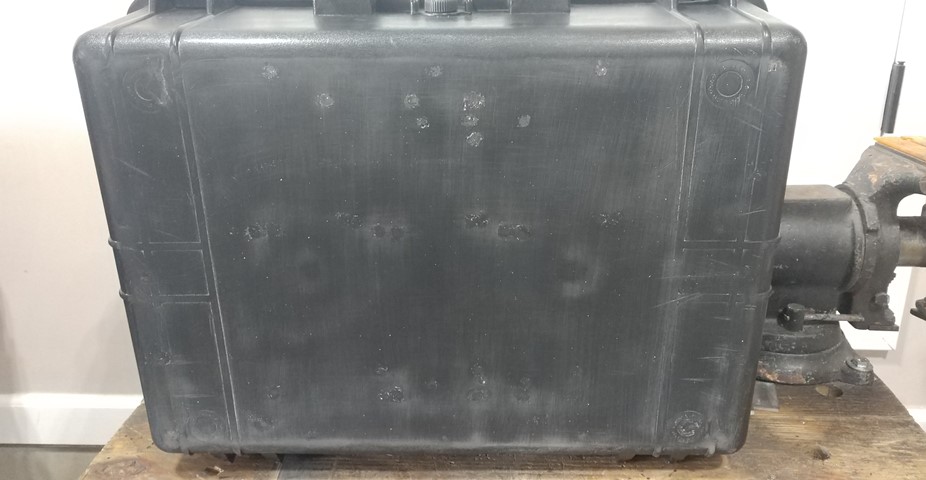 The Happy Trails racks had to come off for the next step, since it gave me more clearance to work on fitting the components to the racks. This is the Pannier Attachment Plate with all the fittings, attached temporarily to the pannier rack so I can adjust the position of the Rack Attachment Bracket: 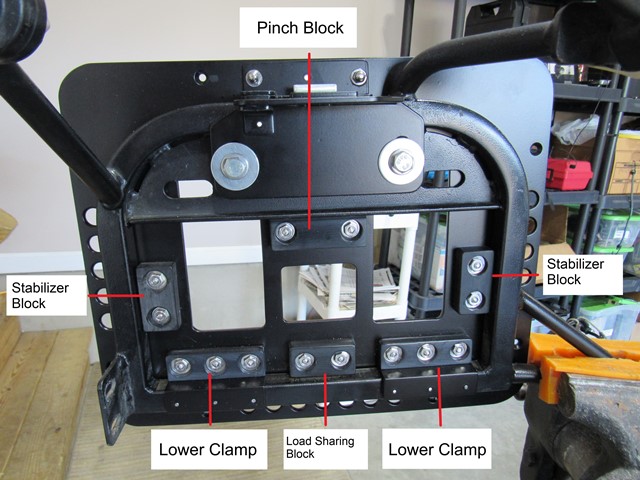 You can see the Rack Attachment Bracket in the photo, attached to the pannier rack by those two large bolts and fender washers. 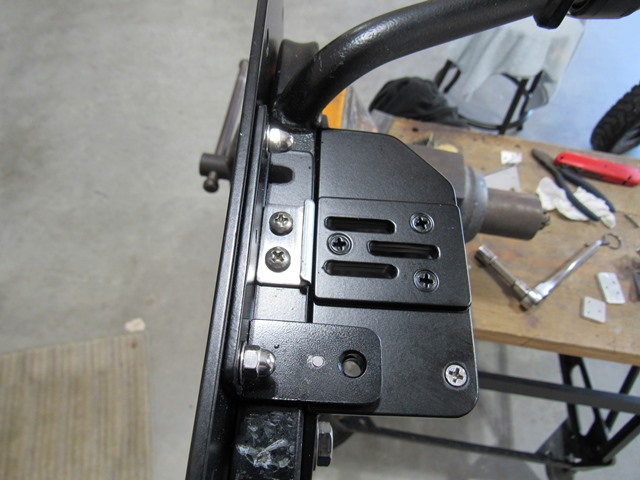 The Top Clamp is L-shaped. The shorter leg of the L is designed to slide over the Rack Attachment Bracket. A locking pin can be inserted through the hole on the Top Clamp into a corresponding hole in the Rack Attachment Bracket. This is safety feature in case there was ever the unlikely failure of the rotary latch. The holes also allow a padlock or cable lock to be used to lock the pannier to the pannier rack.

This is the rotary latch being fitted to the Rack Attachment Bracket: 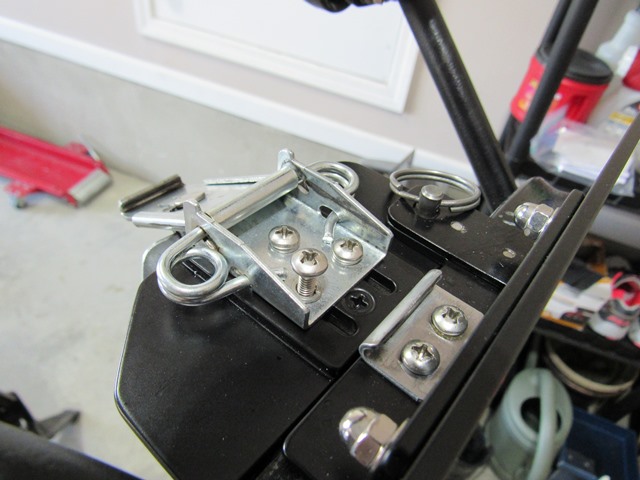 There are three slots on the top of the Rack Attachment Bracket. These slots allow the tension on the rotary latch to be adjusted.

This photo shows a closeup of how the Lower Clamp grips the lower horizontal tube on the Happy Trails rack. 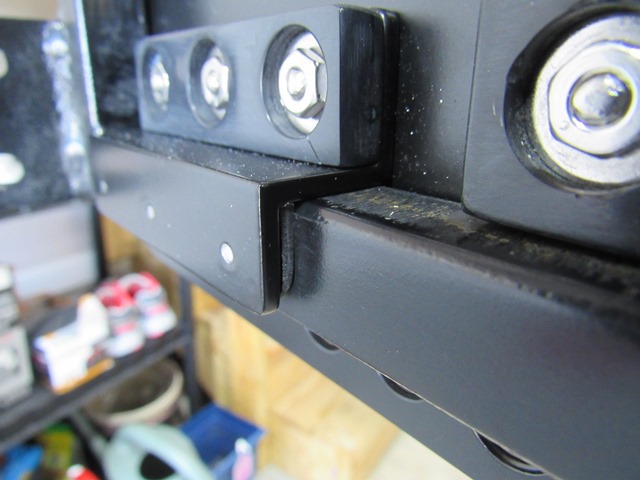 Once all the components were adjusted for fit, I removed the Pannier Attachment Plate from the pannier rack and figured out where I wanted to install it on the pannier. Once I had its location figured out, I used the plate as a guide to mark the eight attachment holes that will secure the plate to the pannier.

This shows the Pannier Attachment Plate with all the components attached to the panner: 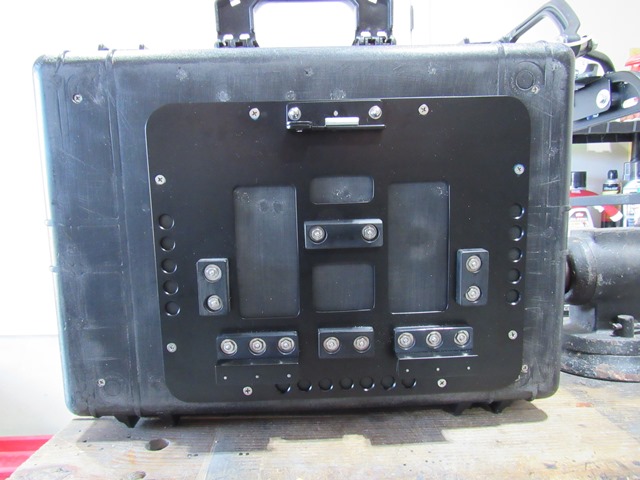 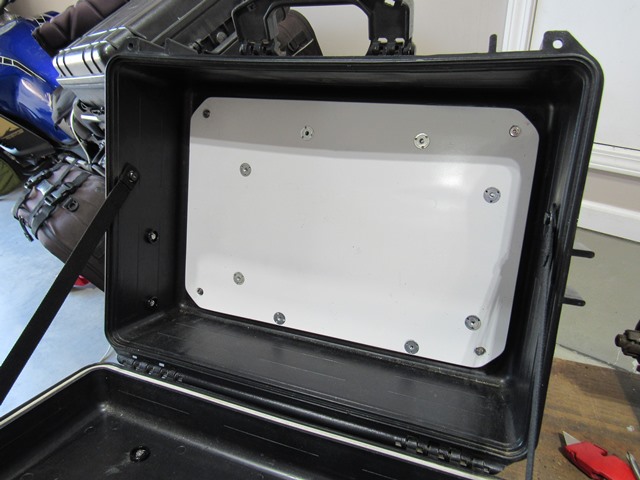 These photos shows the right side pannier secured to the pannier frame: 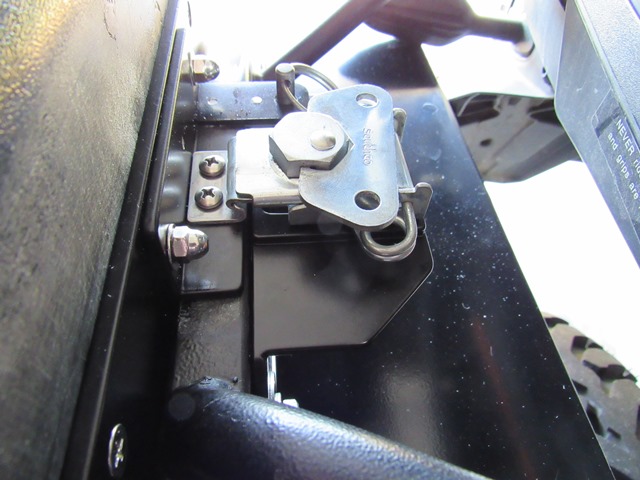 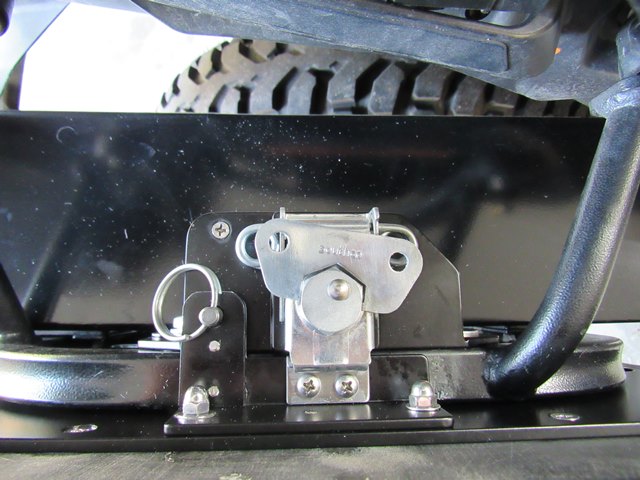 The latch is shown in the closed position. You can also see the locking pin inserted into its position.


And there you have it. I believe this new version will solve the design flaws of the previous one (the flaws are noted in the PDF document). If there’s another maker out there that’s looking for a way to attach their panniers, I hope this gives them some ideas.

Exceeded the number of photos allowed in one message, so I had to leave this one off: 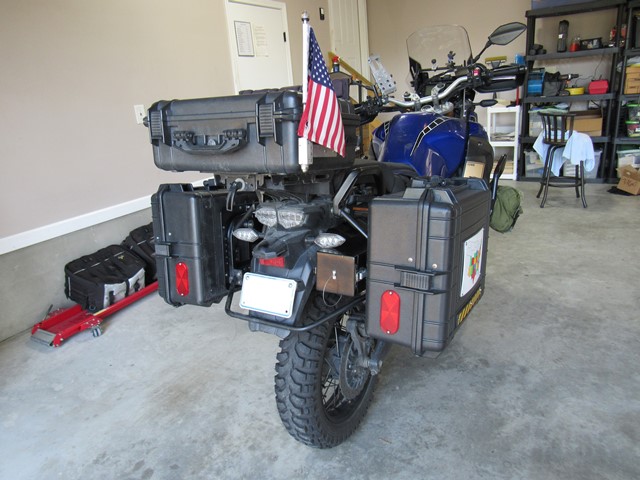 Nice job!
The 7/16” holes around the perimeter, do they have a function?