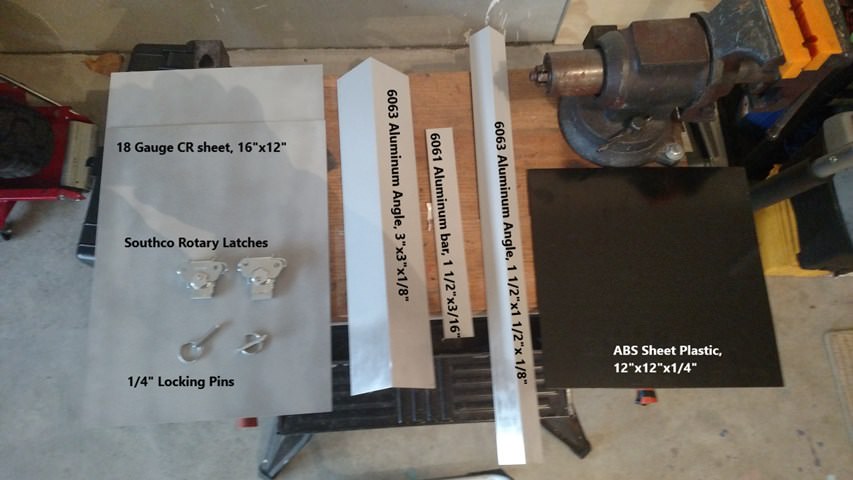 This picture shows the major material used in the construction of the attachment system. The aluminum and steel items came from Metals Depot (an online metal supplier), and the ABS plastic sheet was from TAP Plastics. My design changed a little as it progressed (it always does), so I ended up having to buy some additional HDPE sheet plastic from Grainger. The rotary latches came from Amazon. 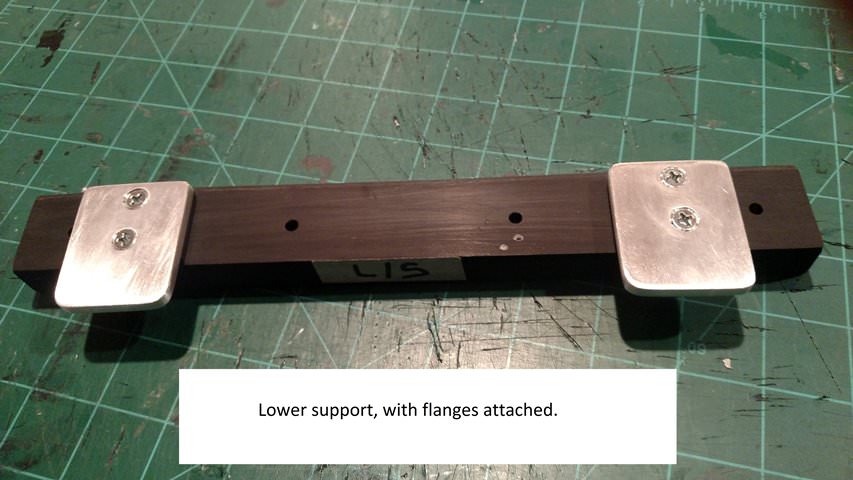 This is the lower support for the pannier. It’s made from three layers of 1/4” thick ABS plastic, glued into a block. The center section has embedded machine nuts, that create attachment points for the aluminum flanges, and for attaching the support to the backing plate. The block is made to fit tightly between the upright portions of the HT rack, to minimize movement of the pannier on the rack. The aluminum flanges were made from the 3/16” thick aluminum bar stock shown in the first photo. 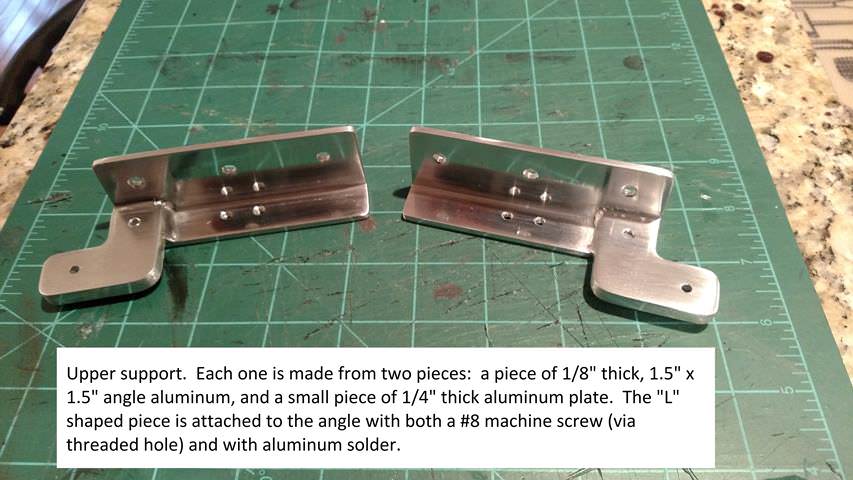 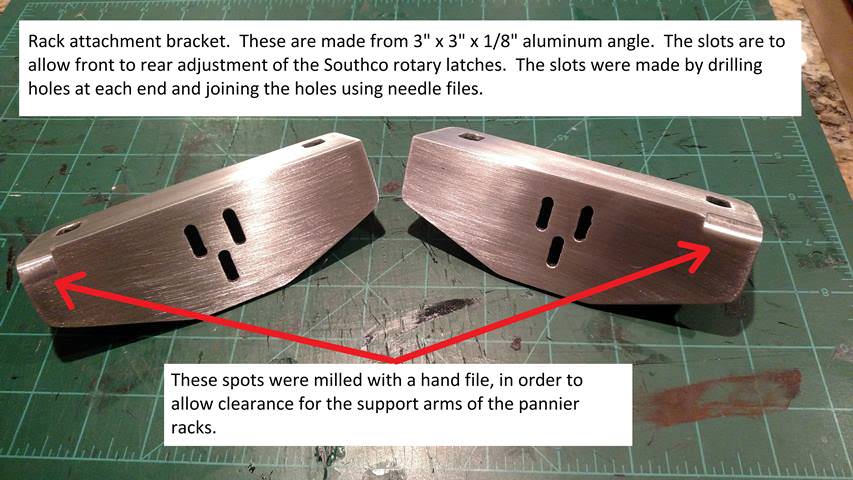 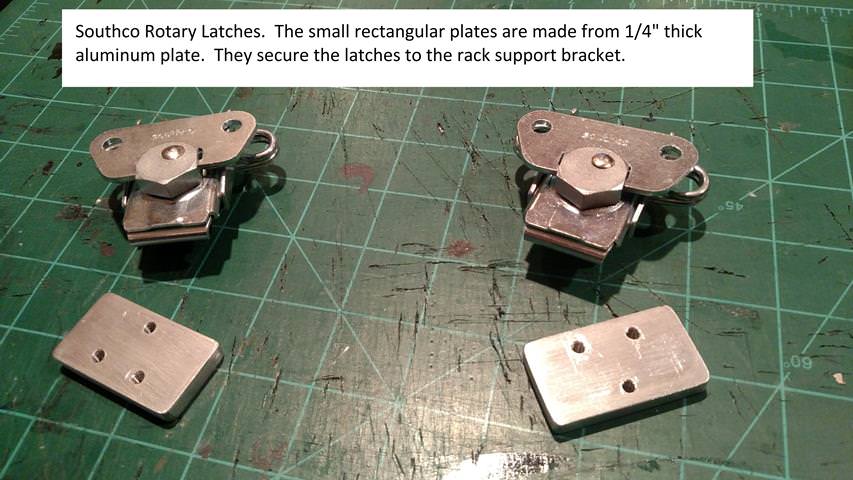 These are the rotary latches. The screws from the latch thread into the aluminum block via three tapped holes. The latch and the block sandwich the pannier rack attachment bracket; the block allows the rotary latch to be adjusted from the top, without the need for a wrench under the bracket. 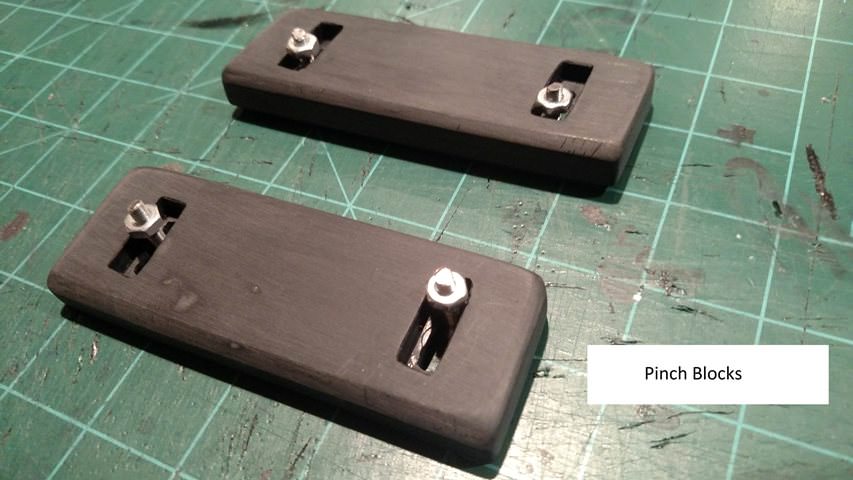 These are the pinch blocks, made from 1/4” ABS. They’re slotted so they can be adjusted. They’re slid into position to clamp the bottom part of the pannier rack, then tightened. They prevent the pannier from being dislodged if it’s struck from below. 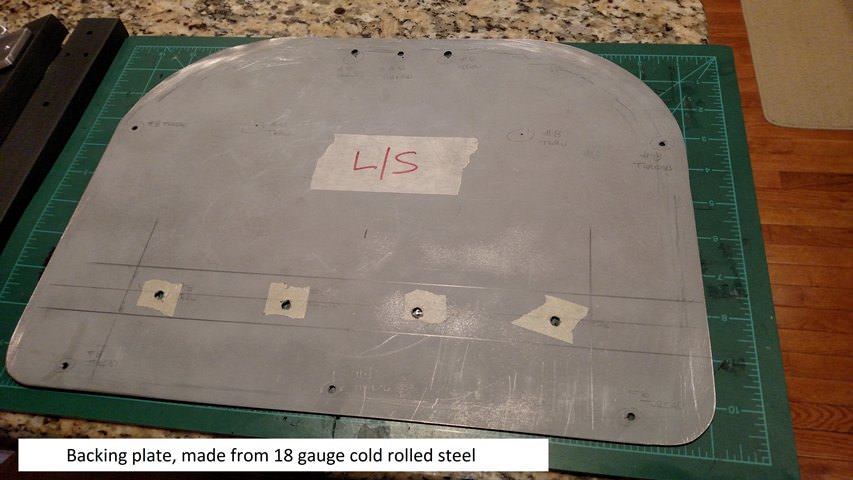 This is the steel backing plate, made from 18 gauge steel. All the components screw to this plate, and the plate then screws to the pannier. At first I just intended to paint it, but after I realized that it would constantly need to be repainted due to contact with the pannier racks, I bought some HDPE plastic and covered the steel with that. The HDPE is attached to the steel with machine screws, which screw into tapped holes in the steel plate. 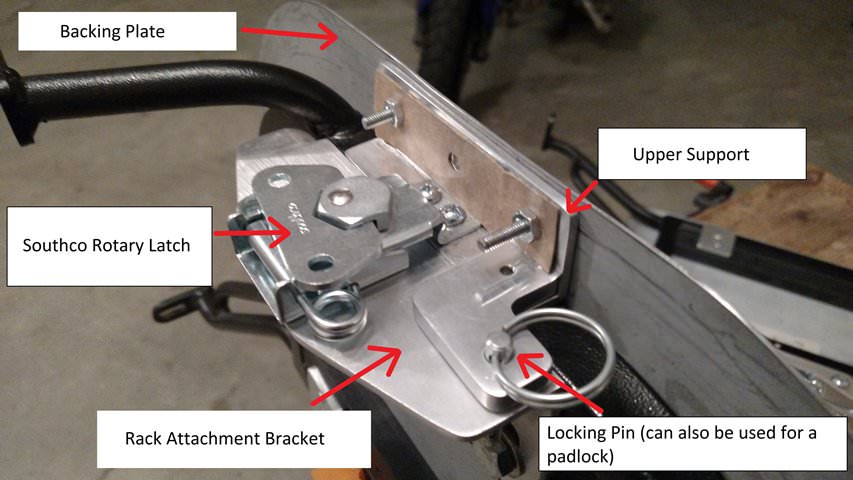 This shows how the latching mechanism is set up. 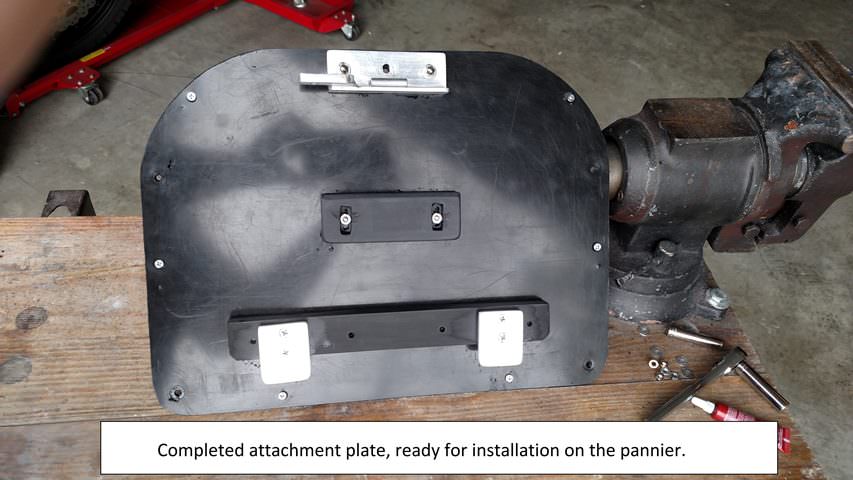 This is the completed attachment plate. 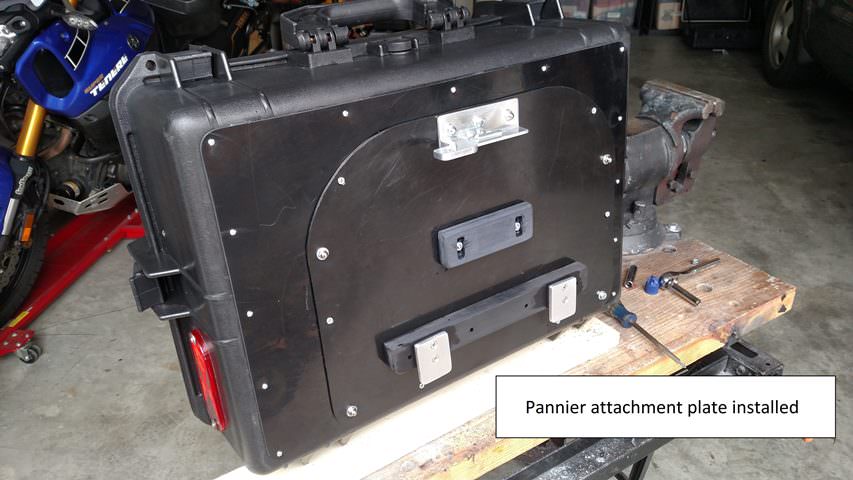 This is the attachment plate, attached to the pannier. 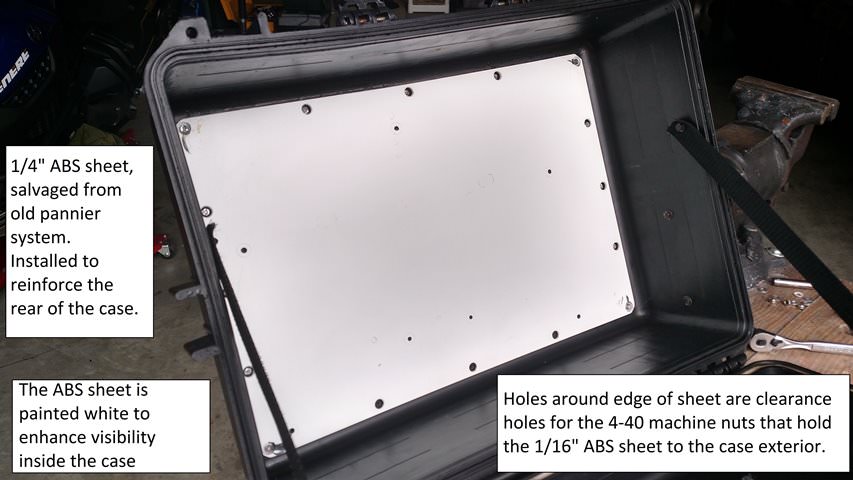 This is the interior of the pannier, after the attachment plate was installed. As you can see, none of the attachment hardware intrudes into the case. 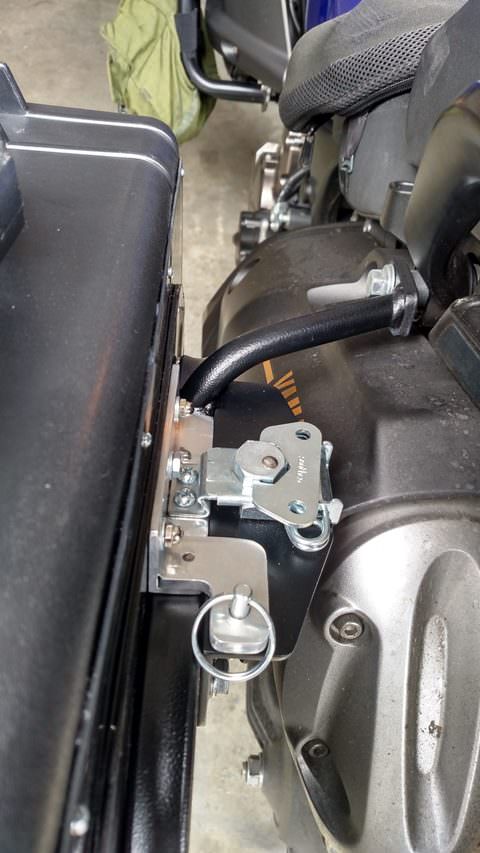 The pannier latched to the rack.

I was pretty happy with the way the project came out. The total pannier weight was 14.2 lbs; that’s only 1.78 pounds heavier than the pannier with the old attachment system. I could have reduced that even further if I’d used aluminum instead of steel for the backing plate, but I used steel for the reduced project cost. The only really specialized tool I needed was a tap and die set; the rest of it was made with regular hand tools (drill, scroll saw, Dremel tool, etc). The attachment to the pannier rack is very tight and secure, but also very easy to remove once the rotary latch is opened. If you’re interested in more details about how the system was constructed, there are a bunch of photos here: http://www.yamahasupertenere.com/index.php?action=media;sa=album;in=103
Last edited: Jan 26, 2020

Another fine job RC ::008:: this is one I will not be attempting though.

Thanks Dogdaze. I've been testing it out, and put 300 miles on it yesterday, and so far so good. Very solid on the bike, no movement or vibration, but it detaches with a quick turn of the wrist. So far so good.

Hey RC, I do not have hardcases, however I do have a similar case to your's that I used as a top box, could I utilise this system for that? Would it hold as there is not a 'downward' weight more of a lateral scenario?

I think it could be made to work, Dogdaze. If you look at my photo album of my top case quick release system, you'll see how the topcase is held in place by the way it hooks under the front of the rack. Those blocks fit through holes in my rack and hook under the rack at the front. The flanges on the blocks keep the case from lifting up at the front, and the position of the blocks where they fit through the holes in the rack keep the case from sliding around from side to side. The case is basically trapped on the rack, so the only thing that's necessary is some sort of catch at the rear of the case to hold it down to the rack. On my topcase I used a quick release seatpost clamp from a bicycle, but that could easily be replaced with a rotary latch.

I could sketch something up and post it, if that would help.

Thanks RC, I will have a look tomorrow and take a picture of my 'Metal Mule' rack, along with the Pelicase and have a look, if I struggle I will definitely email you for your assistance ::008::
Then of course need to find the hardware ::010:: but if I figure it out in time, my sister-inlaw is coming over in a few weeks, so she could always pick up the latches for me....

Ha Ha - We did the same hockey puck system to mount the Pelicans to my son's VStrom. They probably have about 20,000 miles and are still going.

You're welcome, John, and thank you.

The hockey puck system is tried and true, and you can't argue with success. I've always preferred the quick release systems because I often take my cases inside the motel when I'm traveling. Plus, I'm an incurable tinkerer, and I'm always looking at something and wondering if I can do it differently (or walking through a hardware store, seeing something, and asking myself "I wonder what I could use that for?"). Part of the inspiration for this project was that I've changed mounting systems a couple times now, and I wanted an easier way to get all the mounting hardware in the right place without the need to remeasure the position of each component. I may change to Pelican cases in the future if I can find a good price on surplus ones, and this system will make it a lot easier to switch over. The idea was bouncing around in the back of my mind for a while, and I happened across the rotary latch one day while I was looking for something on line. That was one of those "eureka" moments, and the project was born.

I like your new set-up more than what I did for the Strom. It did come off quickly, loosening the two thumb screws. (Top is to the left, bottom to the right) 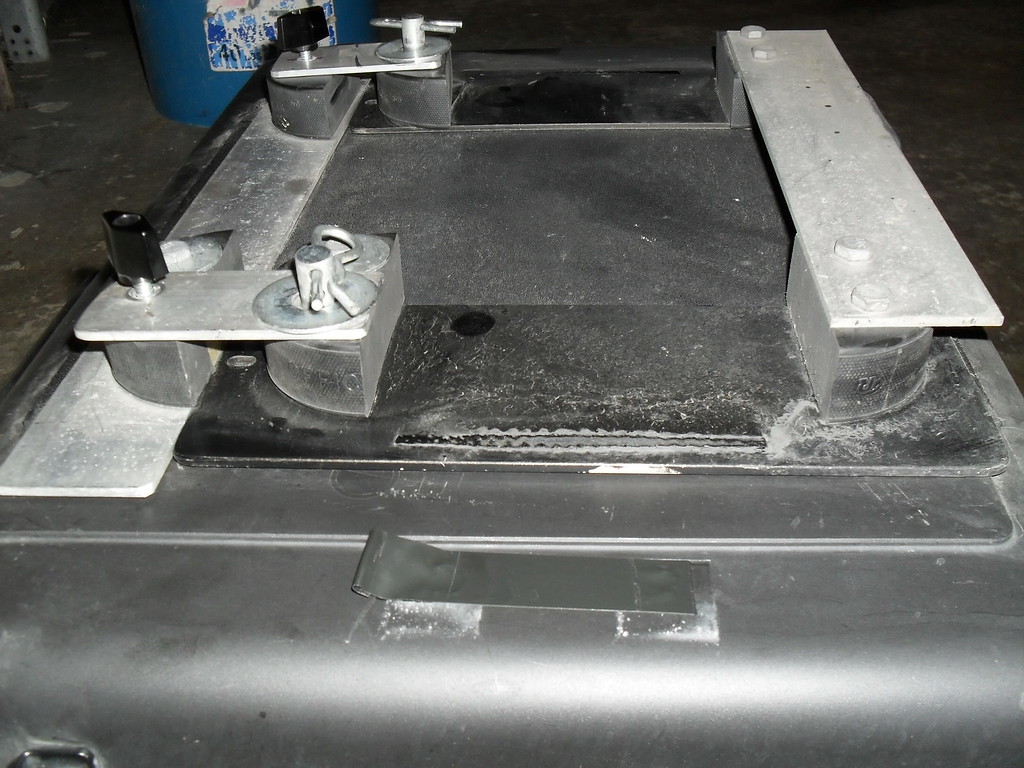 I started off with a design a lot like yours, Checkswrecks, though I used laminated blocks of ABS plastic rather than the hockey pucks. I had a bunch of leftover 1/4" ABS sheet plastic following a disastrous attempt to make touring panniers for my Harley, and I wanted to repurpose it so it didn't go to waste. Counting the brief period that I had ammo can panniers on my V-Strom, I think this is my fourth version of a pannier quick release attachment system. Now I'm designing a new top case attachment system that'll use an interchangeable mounting base that can accommodate both my small and large top case, plus a pack tray that can haul bulky items.
You must log in or register to reply here.
Share:
Facebook Twitter Reddit Pinterest Tumblr WhatsApp Email Link
Menu
Log in
Register
Top