Good evening Folks.
What do you all carry with you camping or long trips as far as USB Battery banks/charges. I would love to get something I can throw in my tank bag and charge off my tether line coming from the battery while riding. I really just need to charge my Sena10CPro, iPhone and iPad in the tent at night.
Was looking at something like the Anker PowerCore 20000

anitygravity xp3. I don't leave home without it. If you evewr have a hard start in the boondocks. You will be glad you had it. It fits under the Altrider rack or under the pillion seat perfect
Last edited: May 21, 2020

Location
On the road !! Terrebonne, Oregon

My advice is buy the smallest, cheapest 20k mah battery pack from a semi-reasonable brand you can find. At some point you're going to lose it or break it. 20k mah is the max for airplane travel.

I'm on my third of the one below. Lost one, another got stolen, third one is still alive. Can charge by either lightning or micro-usb which is super handy depending on what I need to charge.

Note, if you have a USB-C laptop. They make 20k mah packs now that can charge a laptop.

I have this exact Anker one.
Anker 20100 mah battery bank

I charge it during the ride in my tank-bag or top-case.
Charges my iphone, Sena headset, GoPro, and whatever else I want to charge at night in my tent.
It holds a lot of juice!

I have the Earth-X. It is very small and compact. It also can jump start a diesel truck.

I strongly agree with Tenman/Criss/Chris on getting one that can also double as a jump starter. You lose no functionality on charging peripherals, but gain the ability to jump a bike/car/truck if you need to. Downside is that some models are larger and eat up more space, so take that into account before deciding.

A youtube channel called Project Farm tested 8 brands a while ago. I believe Audew did the best overall, which runs about $100 for 20000 mAh (rated 4.6/5 stars, currently). Granted, its footprint is about 9" x 3.5", which isn't exactly small (~about 2.5" longer and 1" wider than the Anker Powercore you're looking at, by quick glance).

I've been using a smaller 400A/8000mAh one by Suaoki for years (only cost like $30), and it has saved my bacon a few times when my other bike didn't have enough juice to turn over.

I have the AG XP-10 now for going on 4 years and have started everything from Kubota's to 5.7L truck and my Vmax that was having charging issues. It works great and holds a charge between uses which sometimes have been 3-4 months.

I've used my Akeem powerbank, lasts me ~40hrs charging my phone and 1 Gopro as they are being used while riding. It only lasted me 24hrs when it was my only charging option for both of them (riding and recharging them at night)

Here's one of my favorites, and reasonably priced for what it has. https://www.amazon.com/gp/product/B0746GQ7FS/ref=ppx_yo_dt_b_search_asin_title?ie=UTF8&psc=1

The reasons I like it:
1. Can be taken on an airplane in a carry on bag (I like to do fly and rides).
2. Recharges electronics
3. Jump starts just fine
4. Charges fastest with its own charger, but can be recharged from a cellphone charger in a pinch
5. Includes an old-style cigarette lighter adapter (which I use to power an older Garmin Zumo 665 on a rented or borrowed bike...I stick this in a tank bag...but I have to leave the battery pack's light turned on because the Zumo pulls very little power so the battery will auto shutoff with just the Zumo connected).

Having done a lot of battery investigations and conferences since the 787 fire of January 2013, PLEASE do make sure whatever you get has a layer of foam or other insulation to keep vibration from the cells.

Make sure to never EVER let the terminals cross either, as lithium packs won't just spark like lead-acid. Below is a before and after: 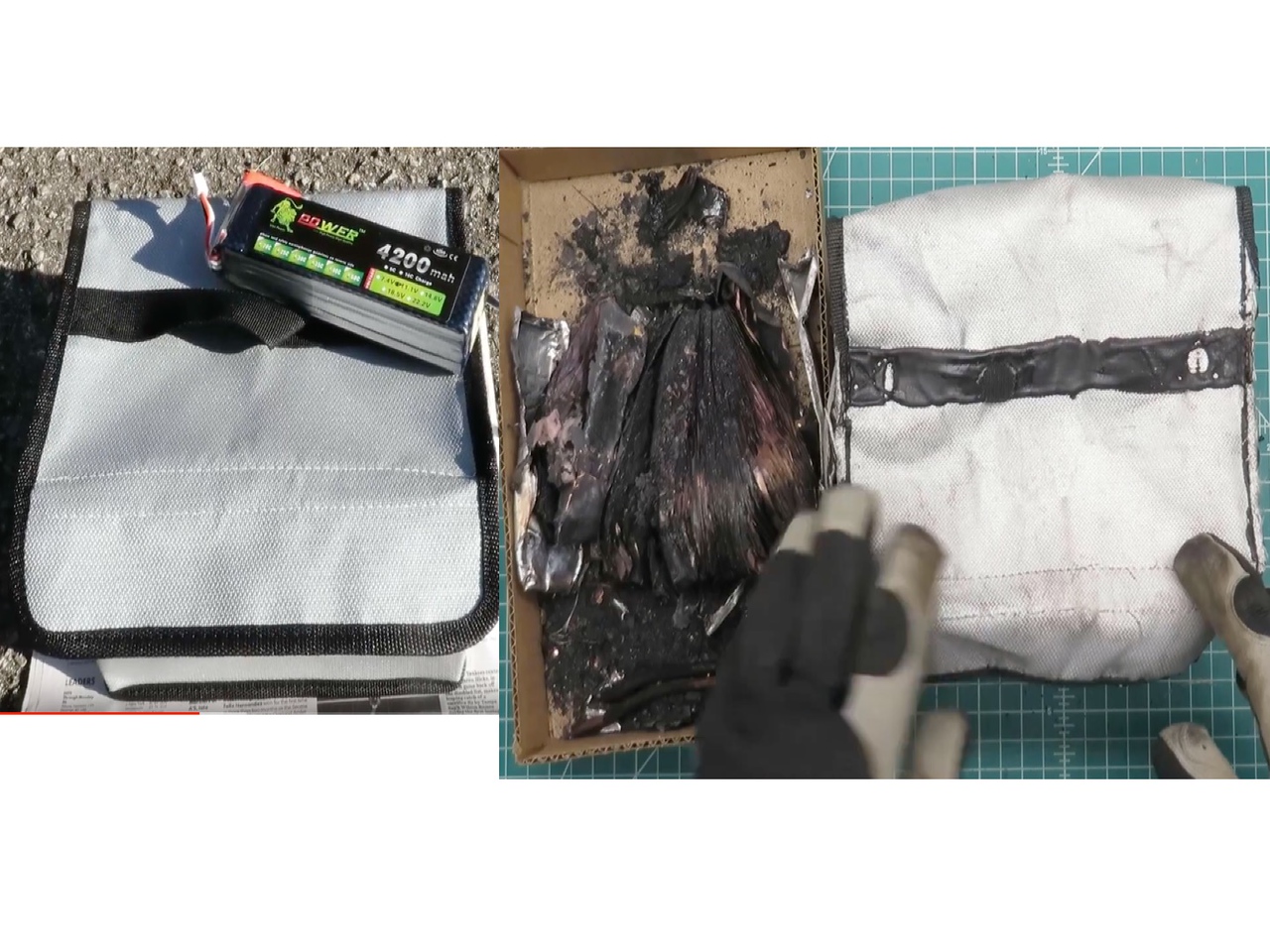 The one I use claims to have "smart tech" to prevent such catastrophes from happening. But, I'm a measure twice, cut once kinda guy, and try not to tempt fate. I will head your warnings.

Neither of which were any where near, when I needed them.

Checkswrecks said:
... PLEASE do make sure whatever you get has a layer of foam or other insulation to keep vibration from the cells...
Click to expand...

Insulation internal to jump pack case or external. I have always carried mine in the original box nested inside the foam cutout. Is this sufficient?

Sent from my SM-G900P using Tapatalk

A completely dead battery will not bump start either. And good luck bump starting off pavement, doubt your rear wheel will hook up on anything but hard pack.

Think of as many scenerios as you can and then decide on solutions for some per your risk tolerance and riding situation.

Sent from my SM-G900P using Tapatalk

I installed one of these on the current bike. LINK They make them in different styles for different versions of their chargers. I have two older XP-3 Microstart units, bought direct from Antigravity. I also have a Juno Jumper 12v/300A unit from Junopower that I won at a bike event. I didn't use it for a few years, but now am carrying it on the bike since this bike has a small issue when it gets stalled and won't always fire up w/o the jumper box. Very compact and holds a charge a long time. Longer than one of my Antigravity units. (for unknown reasons, one of the XP-3s holds a charge for only about a month or less, the other one seems to last forever.) Both the Junopower and Antigravity units use the same style power connector for the jump cables. Both come with smart jumper alligator clips that are a little bulky to carry, as well as charging cords. The XP-3 also came with a multi-adapter charger pig tail that covered old and new i-phones, USB mini and Garmin GPS plugs.

At this point in time, I am liking the Junopower unit better than the Antigravity unit. Smaller. Both have lights. With the hard wired in starting harness I only carry the Juno Jumper box and charging cord w/110 adapter on the bike. It will charge my Sena, phone and anything else that has a USB plug. I've jump started the bike maybe 5 times and it still reads 4 of 5 bars, w/o topping of the Juno. The V2 costs $99 and the current XP-3, (which will jump start a 4.6L V8 engine), costs $120. Both are quality products, IMHO, that I would buy again. The Antigravity Sport is more comparable to the Juno Jumper V2 that I have, and is also $99 from Antigravity.

Good info from all on the jump units, but if you opt for just something that charges your small electronics devices, I can throw another vote in favor of the Anker 20k. I've used mine for over a year now and continue to be pleased with the ability to charge multiple devices, multiple times, over multiple days from a relatively small, sleek unit. Will look to the Juno/XP-3 when it disappears or when I plan a solo outing into territory lacking asphalt downhill slopes.

Well I can now review my Earth-X jump box. Un damn believable!! My wife's battery was bone dead an hour ago. I pulled the jumper out of my rear saddlebag compartment, hooked it up and her car instantly started. I am amazed and blown away how such a small device can work so well. I have to admit I was a little nervous because the jumper has been setting and never used since I bought it 11 months ago. Her battery is shot but the jump pack saved the day!!